The history of fashion reveals so many tales, and in this sense the leather jacket is today one of the most worn clothing items and mixed with the most varied looks. But let's see how this garment has acquired life and under what origins it has made its way.

First of all you must know that the nail is strictly Italian and refers to the punk custom of keeping a nail in your pocket.

Initially, the leather jacket was known as a “flying jacket” because it was worn only by aviators.

But it is with the name Perfecto that the leather jacket gains popularity in the world. The model was created in 1928 by the American Irving Schott for the Schott Brother NYC, and became the leader most used by motorcyclists.

But the history of fashion and in this case of the leather jacket has its origins long ago: precisely from 1905. The advertising campaign was decidedly revolutionary for the time, because the model wore a white lace corset combined with motorcycle trousers and boots. With the slogan "Leather motor clothing for ladies" the official entry of leather into the world of fashion was celebrated.

The '50s and' 60s: the world of cinema and music crown the nail as a fashion leader. But it is since the '50s, with actors like James Dean and Marlon Brando , that the leather jacket becomes a real cult and a symbol of rebellion.

In 1953 Marlon Brando stars in the film "The Wild": his character wears a Schott Perfecto 618, modified for the occasion with the name of the protagonist (Johnny), embroidered on the heart, and the famous crest with the skull and crossed pistons, painted on the back.

With them born bikers, British youth groups that as a lifestyle had chosen the dedication to the motorcycle. In addition to the leather jacket, their outfit consists of Walker boots.

The nail thus becomes a symbol of masculinity and rebellion as mentioned, which made the two actors the idols of millions of girls.

The leather jacket acquires new life with the arrival of the first rockers such as Elvis Presley and later of the greasers, which were distinguished by the use of glitter and listening to rock'n roll music, and later rockabilly.

During the '60s and' 70s the skin is abandoned, the children of flowers adopt a colorful and floral look. In the second half of the '60s, that the light-colored jackets will make their appearance again.

Unforgettable jacket with fringes by Jimi Hendrix. In the '70s the leather jacket returned to be black. In the wake of punk it is decorated with studs, chains and other accessories. In Italy it is called a studded jacket (hence the name above). The leather jacket and the Punk acquire a perfect combination: punk is a rebellious and direct musical genre born in England. 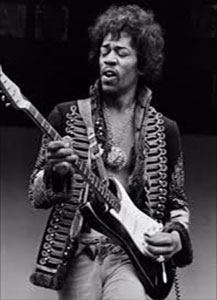 Thinking of the cinema and the leather jackets that have been engraved in everyone's memory, there are: the long jackets and the suits of the protagonists of Matrix or the jacket of Wolverine by X Man.

"The things you own eventually have you."